Assemble a headquaters for your gangs and provide them with a place to call home using this Gang Stronghold kit. The Zone Mortalis is known as deadly ground and gangs need somewhere to live in such a lethal environment. This Stronghold is able to be assembled in multiple ways and other kits can also be combined to expand the size of your base.

Warhammer 40k Necromunda is a tabletop wargame where players will control their gangs as they battle in the Underhive. The planet is a hive world full of factories and mines all founded during the Dark Age of Technology. Within the Undercities gangs will work and fight until their death without the opportunity to ever witness daylight. The setting of the game is clearly resembles the Hive City as the 3D tabletop layout features multi-story buildings and bridges. Players will gain experience, members and equipment as they fight in the crime-ridden Underhive to become stronger!

This kit contains 157-part plastic components to assemble the Gang Stronghold: Zone Mortalis. There is also rules included for the watchtower, stronghold gate, gunk tank and firing ports. This set is fully compatible with other Zone Mortalis kits and can be combined to create an epic terrain! 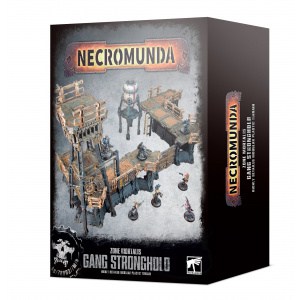 You're viewing: Gang Stronghold: Zone Mortalis (Necromunda) £43.67
Add to basket
We use cookies on our website to give you the most relevant experience by remembering your preferences and repeat visits. By clicking “Accept”, you consent to the use of ALL the cookies.
Cookie settingsACCEPT
Manage consent