Zombicide: Black Plague takes the zombie apocalypse into a fantastical medieval setting! The arcane powers of the Necromancers have unleashed a zombie invasion in the age of swords and sorcery, and it’s up to your group of straggling survivors to not only stay alive during these dark times, but to take back the realm and punish those responsible for the apocalypse!

Zombicide: Black Plague allows you take control of paladins, dwarves, knights, and magicians, wielding powerful swords, crossbows, and even magic spells to defeat the zombie hordes and its Necromancer overlords. The classic Zombicide rules have been revamped for this new incarnation of the game, while still retaining the nonstop action, tense atmosphere and easy-to-learn rules that made Zombicide a classic. Equip your survivor with equipment like chainmail armor or shields to defend against the undead, pick up spell books to perform fantastic enchantments, or light up a pool of dragon bile to create an all-consuming inferno of dragon fire!

Zombicide: Black Plague is a standalone cooperative board game for 1 to 6 players that brings the relentless zombie-killing action of Zombicide into a brand new fantasy setting, featuring different Survivors from all walks of medieval life and even some fantasy races like dwarves and elves! Each of these heroes possess their own unique abilities to face the zombie horde, from familiar skills to all-new ones! Players control a party of Survivors as they fight to rid the land of an invasion of the fearsome horde of zombies raised and controlled by Necromancers. Survivors find weapons, learn spells, battle zombies, and gain experience. The more experienced they get, the more powerful they become, but the more zombies rise to face them!

Armor introduces a new twist for Zombicide veterans. A survivor wearing armor (or carrying a shield) has a chance of blocking multiple zombie attacks with a lucky roll (although it’s no help against the Abomination). Each card’s symbol indicates the slot where it’s used. Weapons and magic spells must be equipped in-hand. Armor must be worn on the body. Special items like extra arrows can be stashed in your backpack. Survivors have varying equipment specializations, allowing them to equip a particular card on the body slot and still have it instantly accessible.

The zombie hordes shuffling around Zombicide: Black Plague’s alleys were raised by powerful Necromancers. When these dark masters enter the board, even more zombies spawn every round. Instead of mindlessly chasing survivors, Necromancers will try to escape and spread more dread across the land! If they’re not eliminated, the avalanche of zombies only gets worse! And there’s the always terrifying Abomination. It ignores your armor, and is practically invulnerable to your weapons. Your only hope is to lay a trap of Dragon Bile in his path. Light it up with a torch at the right moment, and you’ll see there’s almost no problem that can’t be solved with the judicious application of Dragon Fire!

Zombicide: Black Plague is much more than just the classic Zombicide game you know and love transported into a fantasy world. While it retains the general Zombicide mechanics, several changes and additions were made for this new iteration. Each survivor in Black Plague receives a quality plastic dashboard to keep them organized. A built-in sliding arrow tracks experience, and plastic pegs mark wounds and indicate new skills. Finally, multiple slots hold all your cards, making the new inventory system intuitive and structured.

Be the first to review “Zombicide Black Plague” Cancel reply 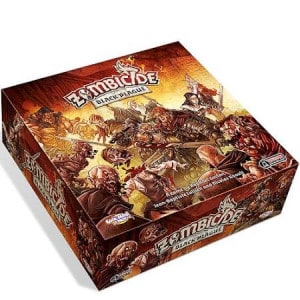 You're viewing: Zombicide Black Plague £69.50
Add to basket
We use cookies on our website to give you the most relevant experience by remembering your preferences and repeat visits. By clicking “Accept”, you consent to the use of ALL the cookies.
Cookie settingsACCEPT
Manage consent