The Zombies have returned and are hungry for human flesh. Only few survivors remain and it’s your job to get them out alive!

Zombicide 2nd Edition is a board game where 1-6 players aged 14 years or over will take on the role of survivors and fight against zombies in a variety of scenarios.

In Zombicide players will take on the role of survivors and zombies will be controlled by gameplay. Players need to co-operate for any chance of survival in a world that has been overrun by the undead. Using guns and gear, the survivors will fight against the zombies through 25 different scenarios!

This 2nd Edition features refined rules, updates surrounding ranged attacks, interactions with doors and vehicle mechanisms. There is also a new dark zone feature, which is a zone that will hide the zombies from survivor’s attacks. Existing collections from any previous Zombicide releases can be used as well.

In Zombicide 2nd Edition, players will continue to take the roles of survivors during the zombie apocalypse. They must all work together to take on a variety of missions, complete objectives and hopefully kill zombies.

Every kill results in a rise of Adrenaline Points which makes the characters grow stronger. However, the zombies will react to this by growing in numbers. The game ends once all mission objectives have been completed and survivors will win. However, if a survivor gets eliminated all players will lose. Do you have what it takes to survive a zombie apocalypse?

Find the full list of game components for Zombicide 2nd Edition below:

Be the first to review “Zombicide 2nd Edition” Cancel reply 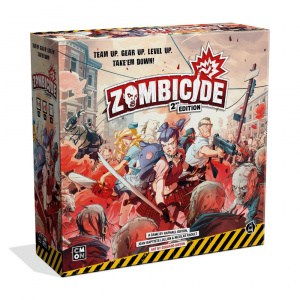 You're viewing: Zombicide 2nd Edition £75.95
Add to basket
We use cookies on our website to give you the most relevant experience by remembering your preferences and repeat visits. By clicking “Accept”, you consent to the use of ALL the cookies.
Cookie settingsACCEPT
Manage consent