Zombicide is a collaborative game in which players take the role of a survivor – each with unique abilities – and harness both their skills and the power of teamwork against the hordes of unthinking undead! Zombies are predictable, stupid but deadly, controlled by simple rules and a deck of cards. Unfortunately for you, there are a LOT more zombies than you have bullets.

Slipping between buildings, ducking behind rubble, and scavenging for anything that might keep them alive just a little bit longer, a group of Survivors navigates the streets of a dilapidated city now overrun by a mindless horde of zombies. Survivors, each with unique abilities, use their skills against the masses of unthinking, blood craving zombies! Unfortunately for you, there are a lot more zombies than you have bullets; luckily, Survivors will also have melee weapons to smash zombies. The more zombies you kill, the more powerful the Survivors become, but the undead will also grow in power. Any misstep can turn to disaster. Bullets, blades, cars, you name it, the only way out is Zombicide!

Using unique and clever mechanics, Zombicide is designed as a fully cooperative game where no player has to play as the zombies. This allows players to fully immerse themselves in the game where they can trick zombies, set traps, and make daring escapes. Running can help these Survivors get out of a tough spot, but the only way they can truly win is by destroying the zombies and committing large amounts of Zombicide! Play 10 scenarios on 10 different maps made from the included modular map tiles, or create your own crazy zombie scenarios!

This is a cooperative game where the players must survive an endless horde of zombies until they can escape. From survival horror to hack-and-slash, Zombicide lets players work together to destroy AI controlled zombies.

With 9 double-sided gaming tiles, Scenarios take place in a riot-devastated urban area comprised from two to nine tiles. Characters move from zone to zone, which are defined by walls and crosswalks. Find weapons, kill zombies. The more zombies you kill, the more skilled you get, the more skilled you get, the more zombies appear. Players must strike a careful balance between fighting the zombie horde and running away from them.

What’s in the box

Be the first to review “Zombicide” Cancel reply 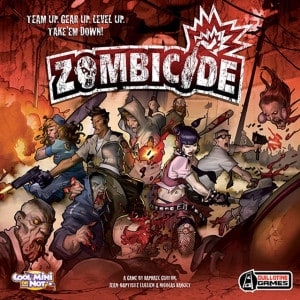 You're viewing: Zombicide £59.75
Add to basket
We use cookies on our website to give you the most relevant experience by remembering your preferences and repeat visits. By clicking “Accept”, you consent to the use of ALL the cookies.
Cookie settingsACCEPT
Manage consent