Pandemic: Wrath of the Lich King – World of Warcraft

Team up with fellow players as legendary heroes come together to combat the evil of the Lich King in this Pandemic System game. The game plays in the form of quests, which must be completed by using both dice rolls and the hero cards at your disposal!

In games of Wrath of the Lich King – World of Warcraft, players will be on a journey to the continent of Northrend in order to face the armies of the Lich King. The game features forts, temples and battlegrounds which populate the game board as players journey across the frozen landscape. Throughout the game players will set up strongholds, complete multiple quests and battle with legions of undead!

Wrath of the Lich King is recommended for 1-5 players aged 14 years or over and lasts roughly in-between 45-60 minutes per game.

Wrath of the Lich King Gameplay

To begin the game players will team up as their legendary heroes from Azeroth, all with unique abilities to help during combat. Heroes include Thrall the Warchief of the Horde, Varian Wrynn the King of Stormwind, Sylvanas Windrunner the Banshee Queen of the Forsaken and so many more. Gameplay involves throwing dice as you charge into battle against many ghouls and ferocious abominations, with hero cards to increase the power of your attacks, block assaults, heal your wounds and so much more!

Be the first to review “Pandemic: Wrath of the Lich King – World of Warcraft” Cancel reply 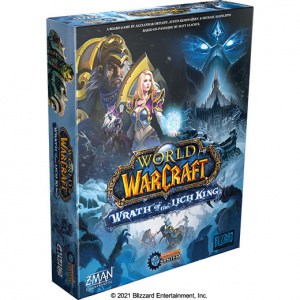 You're viewing: Pandemic: Wrath of the Lich King – World of Warcraft £44.40
Add to basket
We use cookies on our website to give you the most relevant experience by remembering your preferences and repeat visits. By clicking “Accept”, you consent to the use of ALL the cookies.
Cookie settingsACCEPT
Manage consent