Explore different strategies and collect a variety of birds in this Wingspan Oceania Expansion! Packed with new bonus cards, egg colours and so much more!

Wingspan Oceania is an expansion pack for 1-5 players aged 10 years or older to collect and play with various types of birds. The Oceania expansion pack includes new mats, food, cards and will last around roughly 60 minutes per game.

Birds are represented throughout the game by a stack of cards with varied types of power. Playing different birds will cost food and possibly eggs, players can also add them to habitats so they can grow in power. Add this expansion pack to your original base game and include 95 new birds to your original collection of cards for more entertainment than ever before. The player with the most points after four rounds wins!

Here is a simplified version of how to play Wingspan:

Below is a full list of components for Wingspan Oceania:

How to Play Wingspan: Oceania Expansion

Be the first to review “Wingspan: Oceania Expansion” Cancel reply 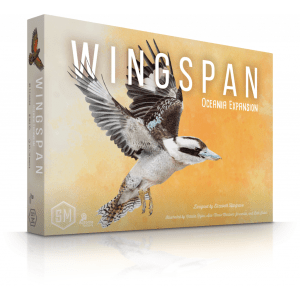 You're viewing: Wingspan: Oceania Expansion £19.70
Add to basket
We use cookies on our website to give you the most relevant experience by remembering your preferences and repeat visits. By clicking “Accept”, you consent to the use of ALL the cookies.
Cookie settingsACCEPT
Manage consent