Expand your original Wingspan game with this European Expansion. There is now a new variety of birds with added abilities so that you can grow your collection!

Wingspan European Expansion takes 1-5 players aged 10 years or over across Europe in search of new birds and abilities!

This expansion brings a new variety of birds with abilities that increase interaction and benefit from excess cards and food. There is also an additional tray to store the collection of birds, extra food tokens, scorepad and purple eggs.

Birds are represented through cards which include different types of power. Playing with birds will cost food and players are able to add them to habitats so they can increase in power. The player with the most points at the end of the game is the winner!

In Wingspan, players will take on roles of bird enthusiasts such as bird watchers, researchers, collectors and ornithologists. The aim of the game is for players to attract the best birds and add powerful combinations to their wildlife preserves.

During each turn, players will take one of four actions including as playing a bird, laying eggs, gaining food and drawing cards. The player with the highest amount of points after four rounds is the winner!

Find the full list of game components for Wingspan European Expansion below:

Be the first to review “Wingspan European Expansion” Cancel reply 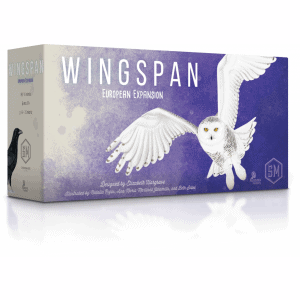 You're viewing: Wingspan European Expansion £19.40
Add to basket
We use cookies on our website to give you the most relevant experience by remembering your preferences and repeat visits. By clicking “Accept”, you consent to the use of ALL the cookies.
Cookie settingsACCEPT
Manage consent