The Knightly Orders are the protectors of the Empire. This collection of novels focuses on three orders – the elite Reiksguard, pious Knights of the Blazing Sun and savage Knights of the White Wolf – as they defend their lands from the many enemies of man.

READ IT BECAUSE
Like Knights? This collection of classic stories from the world-that-was showcase these heroic warriors, who exemplify the ideals of the Empire, defending the weak and needy from their foes.

DESCRIPTION
The Knightly Orders are entrusted with a sacred duty – the protection of the Empire, from a myriad of foes. Clad in gleaming full plate, the Knights are magnificent figures, the elite of the elite.In the midst of war, the Reiksguard Knight Delmar von Reinhardt discovers that his order hides deadly secrets, and must unearth the truth no matter which noble knight he finds at its heart. Hector Goetz, Knight of the Blazing Sun, is sent to investigate the disappearance of a group of comrades, but with disturbing nightmares plaguing him, and a band of northern savages laying siege to the island, Goetz finds himself in a fight for the soul of his order. And, in the city of Middenheim, only a company of the Knights of the White Wolf stand between the city and total annihilation.

This omnibus contains three novels – Hammers of Ulric, Reiksguard and Knight of the Blazing Sun – and a collection of Knights of Manaan short stories.

Be the first to review “Knights Of The Empire: Warhammer Chronicles (Paperback)” Cancel reply 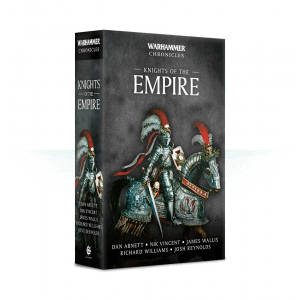 You're viewing: Knights Of The Empire: Warhammer Chronicles (Paperback) £12.15
Add to basket
We use cookies on our website to give you the most relevant experience by remembering your preferences and repeat visits. By clicking “Accept”, you consent to the use of ALL the cookies.
Cookie settingsACCEPT
Manage consent