This starter set for Warhammer Underworlds allows you to discover the Mirrored City and improve your skills ready for combat. Everything you need to begin your new adventures is right here in this set!

The Warhammer Underworlds Starter Set allows you to control warriors, monsters and wizards and command defeat upon your opponents. This starter set includes two plastic warbands which are easy to assemble. This means you will be able to start your battles of Warhammer Underworlds within minutes.

Shadespire, also referred to as the Mirrored City, was founded during the Age of Myth so that travelers can get through the Desert of Bones. Those who enter risk entrapment as the city is stuck between realms, with decaying bodies and trapped souls within. Full of illusions and cramped streets, would you dare to enter?

Storm of Celestus Warband includes three warriors and their Gryph-hound that dominates the battlefield. The Gryph-hounds are beasts that can use their sharp claws and beaks in battle as they hunt in packs. Warriors will also use fearful weapons as they investigate the curse surrounding Shadepsire.

Drepur’s Wraithcreepers includes four servants of Nagash that enjoy inflicting damage towards their enemies. Once noblemen who only lived to hunt, soon became bound to the service of Nagash. They can also drift through the enemy and terrain as a special move.

This set is perfect for those who want to get started with games of Warhammer Underworlds.

Take on your battles of the Warhammer Underworlds by building your army with this set in which you will find: 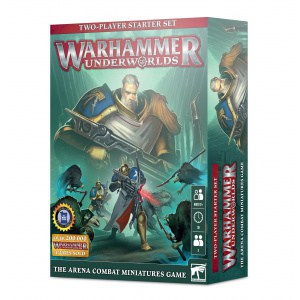 You're viewing: Warhammer Underworlds Starter Set £31.16
Add to basket
We use cookies on our website to give you the most relevant experience by remembering your preferences and repeat visits. By clicking “Accept”, you consent to the use of ALL the cookies.
Cookie settingsACCEPT
Manage consent