The shadow realm of Ulgu is known for being a dark and gloomy place, it takes the bravest souls indeed to adventure into the darkness beneath the Shadowsea to search for spoils and glory. However, these two new warbands are more than ready to plunge into the horror known as Harrowdeep!

Packed full with brand new components, Harrowdeep is the biggest Warhammer Underworlds core set to ever be released. Featuring brand new mechanics including Gloom tokens to hide objectives from view and more horrific ways to die than ever before. In this set you will find the new Thunderstrike-armoured Stormcast Eternals and the Kruleboyz!

Deep down in the darkness of Ulgu is an impossible maze hidden far beneath the sea. Two warbands have decided to brave the twisting shadow-magics of this dark place, one spurred by belief and the other by selfishness and greed. Success may result in escape and survival, but very few will return from Harrowdeep.

Inside this box set you will find everything that you need to start battles below the Shadowsea, including miniatures, dice, cards, and so much more. Harrowdeep marks the start of season five of the Warhammer Underworlds with a fast-paced skirmish game set within the Mortal Realms!

Be the first to review “Harrowdeep: Warhammer Underworlds” Cancel reply 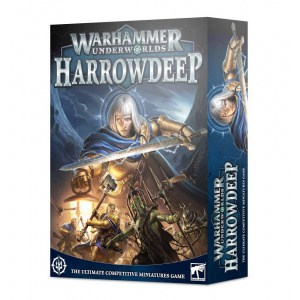 You're viewing: Harrowdeep: Warhammer Underworlds £51.61
Add to basket
We use cookies on our website to give you the most relevant experience by remembering your preferences and repeat visits. By clicking “Accept”, you consent to the use of ALL the cookies.
Cookie settingsACCEPT
Manage consent