A brand new edition of Warhammer Quest with 60 fantastic miniatures!

Embark on a desperate gauntlet through the Cursed city of Ulfenkarn. Are you brave enough to risk your life and save it?

Warhammer Quest: Cursed City is a brand new boxed game within the world of Warhammer Age of Sigmar which follows the doom surrounding Ulfenkarn. The story begins after the Necroquake which caused the undead to rise from the Mortal Realms. The events resulted in Radukar the Wolf beginning a murderous rampage to kill all citizens. Radukar changed the name of the city once known as Mournhold to Ulfenkarn, meaning ‘the wolf’s feast’.  Described as a ‘charnel house’ throughout the trailer, the city has been taken over by corpses, vampires and slaves.

Get together with up to three players and fight to save the Cursed City as you play one of the eight heroes in a cooperative exploration game. Use the characters unique weapons and abilities to fight the Deathrattle Skeletons, Deadwalker Zombies and Zombie Ogors. If all heroes combine their powers together, they may just be able to free the city.

Destiny Phase – For this phase, roll destiny dice and remove any doubles, triples, quadruple or quintuples. If any dice remain after this, move them to the white space found on the board. These dice can be used by any player throughout the game.

Initiative Phase – Each players rolls one activation dice for each empty space on the character card. The chosen leader will then make an initiative deck and draw one card at a time to determine the order of which the heroes and villains will act. If you do not wish to play this order, you can spend one order dice to perform a gambit.

Activation Phase – Heroes and villains take it in turns to use the six main basic actions: Move, Run, Extract, Recuperate & Special Abilities. Throughout this phase you can also collect treasure cards.

Event Phase – This phase determines whether your journey will end or continue. The leader will roll the dice and the result will show if heroes and villains get free moves or possibly something worse. Once this is complete, the journey phase will begin again.

Build or expand your army by adding the new Cursed City models to enter battle. You can also play these models in regular games of Warhammer: Age of Sigmar. However, there is much more that comes with this set: 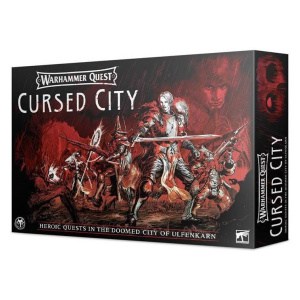 You're viewing: Cursed City: Warhammer Quest £99.25
Add to basket
We use cookies on our website to give you the most relevant experience by remembering your preferences and repeat visits. By clicking “Accept”, you consent to the use of ALL the cookies.
Cookie settingsACCEPT
Manage consent