Help the Ultramines in their fight against the Warlord Zanzag and relive the adventures of Captain Cato Sicarius and Sergeant Scout Marines Torias Telion!

Warhammer 40,000 and the Heroes System have collaborated so that you can help the Ultramines. Just like Gloomhaven, Heroes of Black Reach is played in scenarios and the outcome of the battle can change the rest of the game.

Heroes of Black Reach is played in game turns divided into three phases: Order Phase, Activation Phase and Supply Phase. We have outlined the rules for each of these phases below. This 2-player game usually lasts around 30 minutes and is recommended for players aged 14 years and over.

Heroes of Black Reach has different rules for different kinds of situations. However, the rules have all been provided on your units or on the game board itself so you don’t have to keep going back to the rulebook!

Heroes of Black Reach divides each game into three phases: 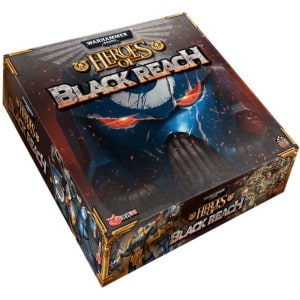 You're viewing: Warhammer 40000: Heroes of Black Reach (Core Box) £29.95
Add to basket
We use cookies on our website to give you the most relevant experience by remembering your preferences and repeat visits. By clicking “Accept”, you consent to the use of ALL the cookies.
Cookie settingsACCEPT
Manage consent