This kit contains the components to build the powerful Chaos Space Marines HQ choice. The Vex Machinator, Arch-Lord Discordant is a swift character that is dangerous at both range and close quarters!

This multipart plastic kit contains the components to assemble the Vex Machinator, Arch-Lord Discordant. This Chaos Space Marines army HQ choice HQ choice can be equipped with a range of destructive weaponry ready for battle. The Lord Discordant is armed with an enormous impaler glaive as well as his mechatendrils so that he can lash out at foes. The Daemon Engine steed can also be equipped with either a baleflamer or autocannon, also including the choice of a magma cutter or techno-virus injector.

The Lord Discordant is a heretic obsessed with machines and rides across the battlefield using the Helstalker mount. He siphons off the spirit of dying vehicles and uses the energy to infect systems of the enemy vehicles. Well known for bringing anarchy to the hivesprawls of Vigilus, his mere presence is enough to bring disaster. Warhammer 40k Chaos Space Marines are utterly selfish, corrupted and fearless due to the offerings of Chaos. They turned against the Emperor during the Horus Heresy, an act that led to centuries of battle and countless deaths.

We highly recommend using the Citadel Colour System and Plastic Glue to bring this miniature to life. Simply follow the guide and prime them ready for future battles of Warhammer 40k!

Find the full list of components for the Vex Machinator below: 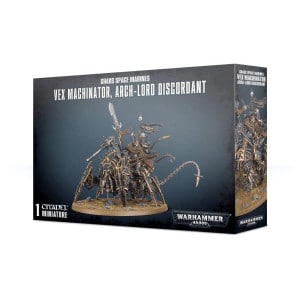 You're viewing: Vex Machinator, Arch-Lord Discordant £33.11
Add to basket
We use cookies on our website to give you the most relevant experience by remembering your preferences and repeat visits. By clicking “Accept”, you consent to the use of ALL the cookies.
Cookie settingsACCEPT
Manage consent