Inquisitor Crowl, who serves on Holy Terra itself, follows the trail of a conspiracy that leads him to the corridors of the Imperial Palace itself…

READ IT BECAUSE
It’s a novel that gets into the seedy underbelly of the Throneworld, Terra itself, at the end of the 41st millennium!

THE STORY
In the hellish sprawl of Imperial Terra, Ordo Hereticus Inquisitor Erasmus Crowl serves as a stalwart and vigilant protector, for even the Throneworld is not immune to the predations of its enemies. In the course of his Emperor-sworn duty, Crowl becomes embroiled in a dark conspiracy, one that leads all the way to the halls of the Imperial Palace. As he plunges deeper into the shadowy underbelly of the many palace districts, his investigation attracts the attention of hidden forces, and soon he and his acolyte Spinoza are being hunted – by heretics, xenos, servants of the Dark Powers, or perhaps even rival elements of the Inquisition itself. Soon they discover a terrible truth, one that if allowed to get out could undermine the very fabric of the Imperium itself.

Be the first to review “Vaults Of Terra: The Carrion Throne (Paperback)” Cancel reply 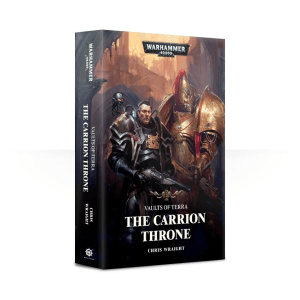 You're viewing: Vaults Of Terra: The Carrion Throne (Paperback) £7.28
Add to basket
We use cookies on our website to give you the most relevant experience by remembering your preferences and repeat visits. By clicking “Accept”, you consent to the use of ALL the cookies.
Cookie settingsACCEPT
Manage consent