The Vampire Lord is determined to prove to the Mortal Realms that the armies of Death are a force to be reckoned with. The Elder Vampires are known as the most powerful vampires with great control over their army as they listen to every command. They continue to grow in power and strength as time goes by making them perfect leaders for the legions of the undead.

Soulblight Gravelords are a powerful army that form part of the Grand Alliance of Death. The monstrous army have only one purpose, to kill all those who live and rule the Mortal Realms with the order of the dead. Remaining loyal to their leader Nagash, they will not hesitate to stop mid-battle and drain their enemies of blood before continuing their slaughter.

However, Vampire Lords do not work alone. Using their dark powers they will raise the dead and command them to commit horrible acts of violence. Their martial and magic powers means they can hold together thousands of servants to strike out across the realms, all In favour of the Great Necromancer.

Paint your spectacular army of Vampire Lords using Citadel Paints and Brushes. The Citadel Colour System breaks down the ways you can you can do this into simple steps so that you can unleash your creativity. There is a huge range of water-based paint to choose from, all designed specifically for Warhammer miniatures. Choose between a variety of Classic and Contrast methods so that your miniatures come to life and are ready for battles of Warhammer Age of Sigmar! 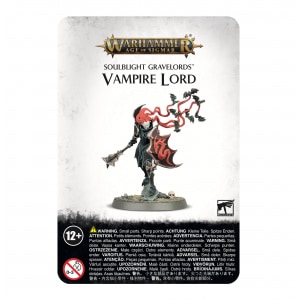 You're viewing: Vampire Lord (Soulblight Gravelords) £14.80
Add to basket
We use cookies on our website to give you the most relevant experience by remembering your preferences and repeat visits. By clicking “Accept”, you consent to the use of ALL the cookies.
Cookie settingsACCEPT
Manage consent