Valdor: Birth Of The Imperium (Hardback)

Constantin Valdor is the chief of the Emperor’s Custodian Guard and among the closest of His companions. As the wars of Unity come to their end, he faces his greatest challenge, as dark deeds are required to pave mankind’s road to the stars.

THE STORY
Constantin Valdor. It is a name that brings forth images of heroism, honour and peerless duty. For it is he who commands the will of the Legio Custodes that most esteemed and dedicated cadre of elite warriors. He is the Emperor’s sword, His shield, His banner and he knows no equal. Clad in shining auramite, his fist clenched around the haft of his Guardian Spear, he is the bulwark against all enemies of the throne, within or without.

Nearing the end of the wars of Unity, Valdor’s courage and purpose is put to the test as never before. The petty warlords and tyrants of Old Earth have been all but vanquished, and the Emperor’s armies are triumphant. What now for the nascent Imperium and what fate its forgotten soldiers, its Thunder Warriors and armies of Unity? A new force is rising, one which shall eclipse all others and open the way to the stars. But change on Terra is seldom bloodless and for progress to be ensured darker deeds are necessary.

READ IT BECAUSE
Delve into the era of the Unification Wars and discover Constantin Valdor’s role in bringing about the Imperium of Mankind in an unmissable novel by Chris Wraight!

Be the first to review “Valdor: Birth Of The Imperium (Hardback)” Cancel reply 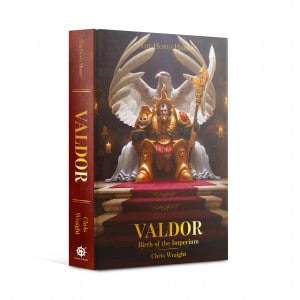 You're viewing: Valdor: Birth Of The Imperium (Hardback) £10.52
Add to basket
We use cookies on our website to give you the most relevant experience by remembering your preferences and repeat visits. By clicking “Accept”, you consent to the use of ALL the cookies.
Cookie settingsACCEPT
Manage consent