Typhus: Herald Of The Plague God

This multi-part plastic kit contains all the components to assemble Typhus, Herald of the Plague God. Including plastic components, citadel round base and an optional Nurgling!

This multi-part plastic kit includes all the components necessary to assemble Typhus, Herald of Nurgle. This is a large model that is covered head to toe in rot pitted armour, skulls, symbols of Nurgle and spikes. The miniature is so large there is even the option for a Nurgling to hitch a ride and cling to his waist. He is armed with a master-crafter manreaper, which is taller than himself and features many unpleasant effects of both corruption and wear. The chimney on his back belches a vile hive swarm, with flies bursting out the same size of a Nurgling. Included is also a base in which he stands with a foot resting on imperial masonry.

Typhus: Herals of the Plague God and Host of the Destroyer Hive is known for being the most feared out of all Plague Fleet commanders. Using his ancient ship he aims to spread contagion as well as misery across the entire galaxy with the blessing of Nurgle. The Warhammer 40k Death Guard use to be loyal followers of the Emperor, but now form one of the traitor legions of the Chaos Space Marines. Now they worship Nurgle, all they are capable of doing is rotting away within their power armour and being condemned to eternal decay as they spread their diseases far and wide.

Find the full list of components for Typhus, Herald of the Plague God below:

Be the first to review “Typhus: Herald Of The Plague God” Cancel reply 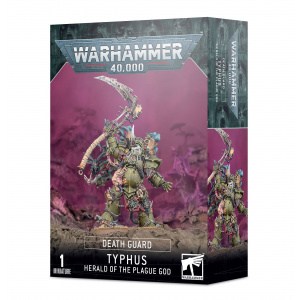 You're viewing: Typhus: Herald Of The Plague God £19.95
Add to basket
We use cookies on our website to give you the most relevant experience by remembering your preferences and repeat visits. By clicking “Accept”, you consent to the use of ALL the cookies.
Cookie settingsACCEPT
Manage consent