Twilight Imperium (4th Edition) takes you through a space power vacuum to unravel the galactic capital left without an emperor. Pick one of 17 factions leading it through one of many paths of victory to sit on the Metacol Rex throne and rule the galaxy.

This strategy board game is ideal for more seasoned players looking for a war challenge set in space. First released in 1997, Twilight Imperium is now available in its fourth edition. The latest edition of the Twilight Imperium Game offers extensive gameplay and a galactic conquest like never before. Complete a selection of individual objectives as well as public and open quests to lead your favourite faction to galactic victory.

This edition of Twilight Imperium features 17 races including some previously only available in expansion packs. Some expansion favourites you will find are Ghosts of Creuss or the Naalu Collective. This board game consists of 6-10 tension-filled rounds. Each round contains several turns focusing on three (and eventually four) phases that each player uses to perform different actions.

Depending on which race (faction) you choose you will be able to use different advantages and deal with challenges based on your abilities. With distinct themes and characters, each player is offered a unique gameplay experience where your wit and strategy is at the heart of your victory path.

The aim of Twilight Imperium board games is to sit on the Metacol Rex throne and rule the galaxy. In order to lead your faction to victory you must use your wit and take risks. Choose whether your path will be one of military strength, political scheming or economic bargaining and manipulation.

This board game will take you through three main stages of gameplay in each turn. Finally, there is one final stage once a player has conquered Metacol Rex. Below is a simplified look at Twilight Imperium gameplay:

This extensive strategy board game comes with many components to lead you through the galactic conflict to capture the throne of Metacol Rex. In the Twilight Imperium board game you’ll find an epic amount of cards, tokens, and units to create your own unique and diverse gameplay.

The board game comes with:

Although we recommend Twilight Imperium to seasoned board game players, this is a galactic war challenge that every type of player will enjoy. As you learn to play through this expansive universe the first games may take between 6-8 hours of gameplay.

Once you have learned the ropes of each faction and how to use your Twilight Imperium board game components, each gameplay will take 3-4 hours. 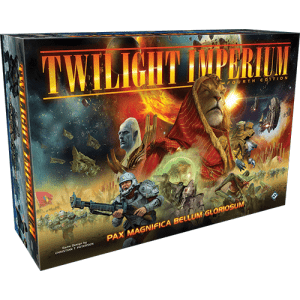 You're viewing: Twilight Imperium 4th Edition £103.50
Add to basket
We use cookies on our website to give you the most relevant experience by remembering your preferences and repeat visits. By clicking “Accept”, you consent to the use of ALL the cookies.
Cookie settingsACCEPT
Manage consent