Treebeard Mighty Ent includes the master Treebeard and two hobbits Merry and Pippin from The Lord of The Rings. Since the loss of the Entwives, Treebeard has put all his care into Fangorn Forest so any threat is certain to cause Treebeard to release his fury and rage!

Treebeard is an ancient tree-like being believed to be the oldest Ent who ever lived. After the loss of the Entwives, he and the remaining Ents decided to isolate themselves from the outside world and stay in the Forest of Fangorn. Merry and Pippin escape to this forest and they all become friends as he carries them to the gathering of Ents. While his fate is not known, he most likely settled down before becoming a tree himself.

Meriadoc Brandybuck is a Hobbit that goes by the name of Merry. Although known to be a troublemaker, Merry was considered the most intelligent of the hobbits. Merry befriended Treebeard when escaping into the Fangorn Forest with Pippin and accompanies him to Entmoot and Isengard.

Peregrin Took is also a Hobbit of the Shire that goes by the name of Pippin. The carefree Pippin is closely tied to cousin Merry and both become the tallest hobbits in history after drinking Treebeard’s “Ent-draught.”

Treebeard can bear Merry and Pippin to battle as this kit includes the option for the hobbits to sit on his shoulder branches. Merry and Pippin also feature as models on foot, now as taller hobbits thanks to Ent-draught!

Treebeard Mighty Ent The Lord of the Rings Components

This set comes complete with all the parts required to easily assemble the mighty ent, Treabeard and his loyal hobbit companions Merry and Pippin as they march together against Sauron’s forces . This kit includes 63 plastic components so you can assemble:

Paint your models using The Citadel Colour System and bring them to life with the following recommendations: 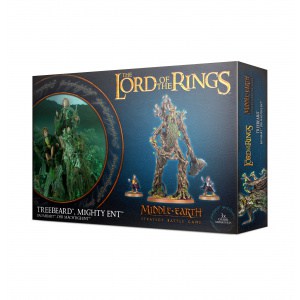 You're viewing: Treebeard Mighty Ent (Middle Earth Strategy Battle Game) £35.73
Add to basket
We use cookies on our website to give you the most relevant experience by remembering your preferences and repeat visits. By clicking “Accept”, you consent to the use of ALL the cookies.
Cookie settingsACCEPT
Manage consent