The Traitor Legios is an incredible guide on how to use Traitor battlegroups in games of Adeptus Titanicus! Including Rules, Background Information, Stratagems, Upgrades and more!

This 176-page hardback Traitor Legios book contains everything you need to march into battles of Adeptus Titanicus. It includes a variety of maniples to use, background Information and rules on how to use the Titan Legions and Knight Households. If you are wanting to march your god-machines to the gates of Terra and destroy them, then this book is your new essential reference!

When the Warmaster went up against the Emperor of Mankind and dragged the Imperium into a civil war, the Titan Legions also got divided. Across the galaxy, the Titan Legion started turning against each other and the worlds quaked beneath their tread. Many decided to follow the Warmaster into treachery, whether it was due to a desire for power, access to knowledge which is forbidden by the Emperor or simply just because their forge world deemed Horus to be more worthy, the Traitor Titan Legions proved to be an indomitable foe.

Strike fear in the hearts of the Loyalists with this Traitor Legios book that contains everything you will need to assemble and marshal Titan Legions fighting for the Dark Gods! 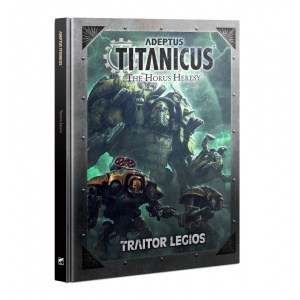 You're viewing: Traitor Legios (Adeptus Titanicus) £23.82
Add to basket
We use cookies on our website to give you the most relevant experience by remembering your preferences and repeat visits. By clicking “Accept”, you consent to the use of ALL the cookies.
Cookie settingsACCEPT
Manage consent