Welcome to the year 3030, where sports that once occupied your television screen is now real life. Tiny Epic Mechs brings an arena-style action-programming game where players will compete as Mech pilots!

Take on the roles of highly skilled Mech pilots and compete for six rounds in Tiny Epic Mechs. For 1-4 players aged 14 years or older, plant land mines, collect resources and purchase weapons to gain the one and only Mech Suit.

Tiny Epic Mechs usually lasts around 30-60 minutes per game which each round giving you a choice of actions. Combat begins when players cross paths and they will take it in turns to attack. Weapons can be used once per fight, so the more weapons you have the better. If a player runs out of attacks, they will either retreat before its too late or be defeated and forced to reset.

The more damage you deal to other players, the more points you will earn. Add up all victory points for every zone you control, whether you own the Mech Suit and for each weapon you own. The player with the most points after scoring the sixth round will become the winner!

Below is an overview of how to play:

All components are listed below:

How to Play Tiny Epic Mechs

Be the first to review “Tiny Epic Mechs” Cancel reply 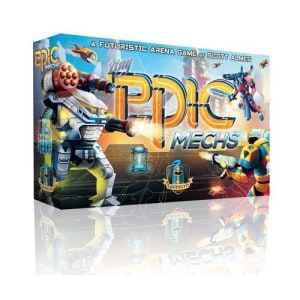 You're viewing: Tiny Epic Mechs £17.50
Add to basket
We use cookies on our website to give you the most relevant experience by remembering your preferences and repeat visits. By clicking “Accept”, you consent to the use of ALL the cookies.
Cookie settingsACCEPT
Manage consent