Explore lands and factions to expand your kingdom in Tiny Epic Kingdoms. Players will exploit opportunities and compete against their opponents to protect their realm!

Tiny Epic Kingdoms is a war board game where 2-5 players aged 13 years or over will explore different lands and factions to expand their kingdom.

Explore lands and factions, expand your kingdom, exploit opportunities, and exterminate all who question your rule in Tiny Epic Kingdoms! This fantasy board game is surprisingly simple and yet deeply engaging to keep players coming back for more. The aim of the game is to gain the most Victory Points. Players will collect these by building towers, using magic abilities and having the most meeples. It is common for players to focus on just one of these aspects according to their race cards abilities.

With 13 unique factions and 16 territories no two games will be the same!

The game begins with each player choosing their unique faction and small territory. During the game, players will collect resources, explore territories, battle, research magic, and build a tower designed to protect their realm.

Players will take it in turns to place tokens on the action board and performing it. After all five action tokens have been placed, the action board is cleared and a new round begins. Continue playing until the end game event has been triggered. The player with the highest amount of victory points is the winner!

Find the full list of game components for Tiny Epic Kingdoms below:

Be the first to review “Tiny Epic Kingdoms” Cancel reply 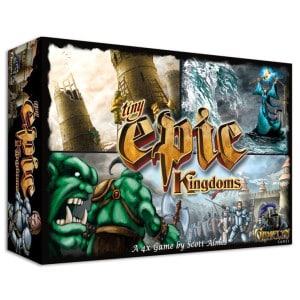 You're viewing: Tiny Epic Kingdoms £18.95
Add to basket
We use cookies on our website to give you the most relevant experience by remembering your preferences and repeat visits. By clicking “Accept”, you consent to the use of ALL the cookies.
Cookie settingsACCEPT
Manage consent