Control a galactic empire and strengthen your galaxy in Tiny Epic Galaxies. Plan carefully as you expand your influence because opponents can follow your actions!

Revolving around an innovative dice-rolling combo mechanic, Tiny Epic Galaxies allows players to colonize new planets throughout the game. 1-5 Players aged 14 years or older can roll each die with symbols to represent the actions they can take. Actions include moving a spaceship, increasing culture, increasing energy and advancing influence over new planets.

Carefully plan out the actions you choose as each of your opponents can choose to follow. So keep that in mind as you grow your empire and influence to become the most powerful planet in the galaxy. Shout out your total score as you gain victory points to the rest of the players, as the first to gain 21 victory points has won Tiny Epic Galaxies!

We have provided you with a simplified set of rules on how to play Tiny Epic Galaxies:

Game components are all listed below:

How to Play Tiny Epic Galaxies

Be the first to review “Tiny Epic Galaxies” Cancel reply 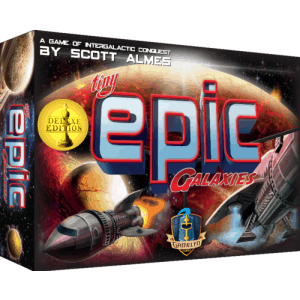 You're viewing: Tiny Epic Galaxies £23.70
Add to basket
We use cookies on our website to give you the most relevant experience by remembering your preferences and repeat visits. By clicking “Accept”, you consent to the use of ALL the cookies.
Cookie settingsACCEPT
Manage consent