Take on roles of the Sorcerer, Cleric, Barbarian and Warlord in Tiny Epic Defenders! This fast-paced game consists of players fighting ff the enemy hordes and eventually slaying the Epic Foe!

Tiny Epic Defenders is a cooperative game where 1-4 players aged 13 years or over will go up against the evil horde and defeat the Epic Foe.

After the Great War many factions were defeated and had lost all hope. However, thanks to the Order of Gamelyn a Capital City has been chosen to become their new home. All seems good, but little do they know about the storm coming ahead!

Tiny Epic Defenders begins with players selecting their classes and working together to go up against the evil horde and defeat the epic foe.

Players have the choice of taking on the role of the Barbarian, the Cleric, the Warrior or the Sorcerer which all have unique player powers.

This fast-paced game involves players going between various regions to fight off enemy hordes and face the epic foe!

Find the full list of game components for Tiny Epic Defenders below: 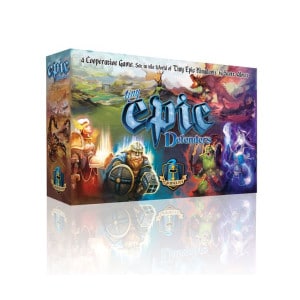 You're viewing: Tiny Epic Defenders (2nd Edition) £20.01
Add to basket
We use cookies on our website to give you the most relevant experience by remembering your preferences and repeat visits. By clicking “Accept”, you consent to the use of ALL the cookies.
Cookie settingsACCEPT
Manage consent