Expand your Ticket to Ride board game with this expansion pack. Complete ticket cards and connect train route in both the UK and Pennsylvania!

Ticket to Ride UK is a game where 2-5 players aged 8 years and over will develop technology in the UK and buy stock from Pennsylvania rail companies. This expansion pack comes with a double-sided game board to include both maps!

Ticket to Ride Pennsylvania is simple to play but involves more strategic choices surrounding what routes to build and when. On the other hand, Ticket to Ride United Kingdom is different to usual and can lead players to build in the same area around London. As the game continues, more paths to victory become clear and players must claim bonus points, tickets and long routes.

Find an overview on how to play Ticket to Ride UK below:

The full list of game components for Ticket to Ride UK will be in a list below:

Be the first to review “Ticket To Ride UK” Cancel reply 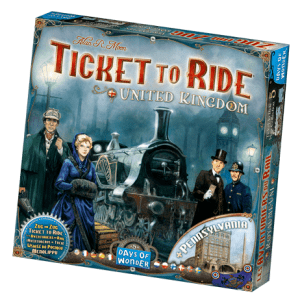 You're viewing: Ticket To Ride UK £24.20
Add to basket
We use cookies on our website to give you the most relevant experience by remembering your preferences and repeat visits. By clicking “Accept”, you consent to the use of ALL the cookies.
Cookie settingsACCEPT
Manage consent