Through the Ages: A New Story of Civilization

Build your own civilisations stating from the age of antiquity to the modern age. Players will need to manage their resources and discover new technologies as any weakness will be exploited by your opponents!

Through the Ages: A New Story of Civilisation is a game for 2-4 players aged 14 years or over. The civilisation building game requires players to use careful resource management, elect the right leaders, maintain a strong military and discover new technologies.

Play the game by drafting cards carefully and bring wonders, technologies and leaders into play. For example, to use a technology you will need to have the science to use it, food to expand the population who will run it and resources to build the building It will be used in.

Opponents will seek out any weaknesses of your civilisation and will steal resources or kill leaders. Make your decisions carefully as it will be difficult to win with a larger military but also very easy to lose with a small one. The player with the most culture points at the end of the Modern Age wins!

Through the Ages Gameplay

Find a simplified version on how to play Through the Ages below:

Find the full list of components for Through the Ages below:

Be the first to review “Through the Ages: A New Story of Civilization” Cancel reply 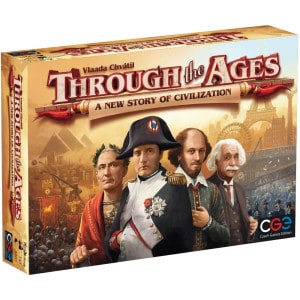 You're viewing: Through the Ages: A New Story of Civilization £35.75
Add to basket
We use cookies on our website to give you the most relevant experience by remembering your preferences and repeat visits. By clicking “Accept”, you consent to the use of ALL the cookies.
Cookie settingsACCEPT
Manage consent