The Scarab Occult Terminators were once known as the finest psykers in the Thousand Sons Legion and were bodyguards to Magnus the Red himself. Now reduced to dust, they have been left as little more than mindless automata.

The Scarab Occult Terminators stride into battle at the command of their sorcerous masters, clad in their armour, they will move towards the foe in silence until weaponry is unleashed. Soon after, the sickening sound of both khopesh blades and Inferno combi-bolters can be heard, as they deliver death to any who insult the warriors of Prospero.

Warhammer 40k Thousand Sons are a chapter of traitor Space Marines who actively battled against the Imperium throughout the Horus Heresy. The Thousand Sons had to seek shelter alongside the traitor legions during the Battle of Prospero. The traitor legion came to be after a great spell was designed to give them immunity to all effects of chaos, which left them as little more than mindless automata. However, some lucky members did manage to escape this fate and now have strong psychic powers while the others have been left as a legion of ghosts led by the damned.

We highly recommend using the Citadel Plastic Glue and Paints to bring some sort of life to these miniatures. Unleash your creativity and discover the impressive range of paints which have been designed specifically for Warhammer painting!

Find the full list of components for the Scarab Occult Terminators below:

Be the first to review “Scarab Occult Terminators” Cancel reply 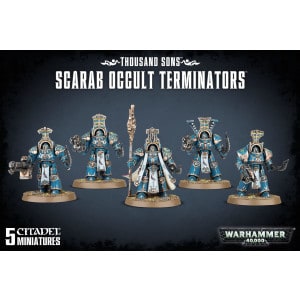 You're viewing: Scarab Occult Terminators £27.79
Add to basket
We use cookies on our website to give you the most relevant experience by remembering your preferences and repeat visits. By clicking “Accept”, you consent to the use of ALL the cookies.
Cookie settingsACCEPT
Manage consent