This kit contains the components required to assemble Magnus The Red. Also including Optional Faces, Scrolls, Daggers and more!

This kit contains the components to assemble Magnus The Red, as well as lots of accessories which can be used to change his appearance. In terms of psychic ability Magnus is second only to the Emperor, which often leads to conflict between the two. As one of the few surviving primarchs, he is now a powerful Daemon Prince of the Chaos God Tzeentch.

Magnus the Red is huge, causing the air to scream as he descends from the skies.  He has led his own troops and survived the events of the Great Betrayal, resulting in his elevated position. Since this promotion he has spent the majority of the millennia in the tower upon the Planet of the Sorcerers, where he plans the destruction of the Imperium.

The Warhammer 40k Thousand Sons are known for being a traitor Space Marine Legion who battled against the Imperium throughout the Horus Heresy. A great spell that was designed to give them immunity to the effects of chaos ended up leaving them little more than mindless automata. Only a few lucky members were able to escape this fate, while the rest are nothing more than a legion of ghosts led by the damned.

Find the full list of components for Magnus The Red below:

Be the first to review “Magnus The Red” Cancel reply 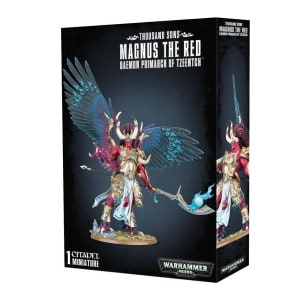 You're viewing: Magnus The Red £74.01
Add to basket
We use cookies on our website to give you the most relevant experience by remembering your preferences and repeat visits. By clicking “Accept”, you consent to the use of ALL the cookies.
Cookie settingsACCEPT
Manage consent