This kit contains the components to build three Exalted Sorcerers. Including Inferno Bolt Pistols, Chest Plates, Head Options and so much more!

This kit contains the components necessary to assemble three Exalted Sorcerers. These experienced Thousand Sons Traitor Legions Sorcerers are known for being incredibly dangerous and capable of possessing potent psychic sorcery. Their power is bound by only the limits of their sanity, so they will delve into the most forbidden psychic disciplines in order to perfect their spellcraft.

Warhammer 40k Thousand Sons are known for being a Traitor Legion of the Chaos Space Marines. They are sworn to the service of Chaos God, Tzeentch, but were once loyal followers of the Imperium of Man. This legion features a sheer number of mutations from the Dark Gods as well as psychic abilities. The Rubric of Ahriman ancient spell was cast after the Thousand Sons fell from Prospero, resulting in their souls being fused into their power armour. Thousand Sons are now just living embodiments of sorcery and mindless automata.

We highly recommend using the Citadel Plastic Glue and Colour System to assemble your three new miniatures. Find inspiration and make your miniatures entirely unique by choosing from a wide range of impressive paints that have been designed specifically for Warhammer painting. Once primed and ready, introduce them to all future battles of Warhammer 40k! 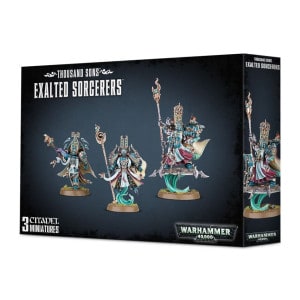 You're viewing: Exalted Sorcerers (Thousand Sons) £28.04
Add to basket
We use cookies on our website to give you the most relevant experience by remembering your preferences and repeat visits. By clicking “Accept”, you consent to the use of ALL the cookies.
Cookie settingsACCEPT
Manage consent