Battle the forces of both good and evil to control the future of civilisation. Players must figure out those wishing to sabotage as they declare their innocence!

The Resistance: Avalon is a party board game where 5-10 players aged 13 years or over will decide who they can trust. Set in the King Arthur’s realm are two teams and it is your mission to figure out those trying to sabotage.

The game is quick to learn and easy to play with enough depth to keep players coming back for more. In this version you will find upgraded components and incredible illustrations throughout!

The Resistance: Avalon is a standalone game and does not require The Resistance to play. However, both games are compatible and therefore able to combine.

The game begins with each player deciding their role which will remain hidden. The chosen team leader will then decide on a number of players to go on a mission. Players taking on a the mission will be have the choice of both success and fail cards. Success cards are given to the side of good, but if you are on the evil side you get the choice of both cards. Your choice will then be given to the team leader who will shuffle and reveal them. Players then have a discussion about the cards that have been revealed and figure out whether there is evil players on the mission.

Multiple accusations will then be made as well as declarations of innocence, this will dictate which players take part in mission choices required for future rounds.

Find the full list of game components for The Resistance: Avalon below:

Be the first to review “The Resistance: Avalon” Cancel reply 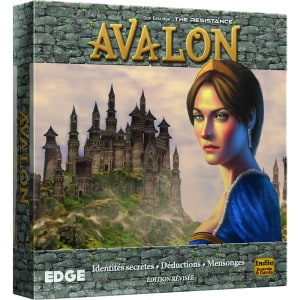 You're viewing: The Resistance: Avalon £13.40
Add to basket
We use cookies on our website to give you the most relevant experience by remembering your preferences and repeat visits. By clicking “Accept”, you consent to the use of ALL the cookies.
Cookie settingsACCEPT
Manage consent