The Resistance is a party game where players are either part of the blue resistance operatives or red imperial spies. Played out over three to five rounds, players must vote their way to victory.

The Resistance is a social game that can have 5-10 players aged 13 years or over. Get your player talking, laughing and guessing in this ultimate party game where your votes reveal the winners. During each round the leader will choose a team to complete a mission and the rest of the players will vote either for or against it.

In each game there is a couple of spies which know the identity of every player. They aim to win their missions by tricking those on the resistance team by using their power of being able to choose between fail and success cards. On the other hand, the resistance players are not sure who they can trust and can only play success cards. The first team to win three mission points wins the game!

Below is a brief overview on how to play The Resistance:

Be the first to review “The Resistance (3rd Edition)” Cancel reply 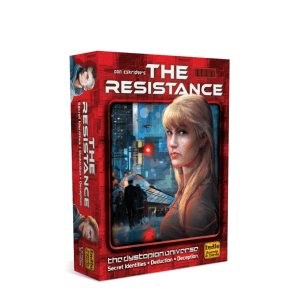 You're viewing: The Resistance (3rd Edition) £12.70
Add to basket
We use cookies on our website to give you the most relevant experience by remembering your preferences and repeat visits. By clicking “Accept”, you consent to the use of ALL the cookies.
Cookie settingsACCEPT
Manage consent