If you have ever been curious about what two animals combined looks like, this creature making card game is the one for you. Compete against each other as you race to collect your muddles!

The Muddles Board Game features multiple mixes of two real animals combined these animals are called muddles. For example, the Bellyfish is half bee, half jellyfish. There is a total of seven muddles for players aged 6 and above to collect with up to another three players.

The aim of The Muddles Board Game is to take it in turns to capture all the muddles. Each muddle comes with a set number of points on the bottom of the card. Add up all these points at the end of the game, the player with the most total points wins!

Here is how to capture your muddles:

Take the Muddles Board Game wherever you go as all you need is:

How to play The Muddles

Be the first to review “The Muddles” Cancel reply 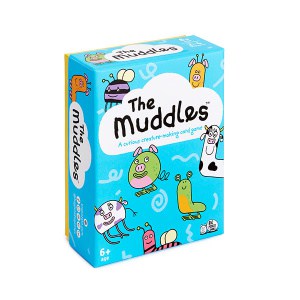 You're viewing: The Muddles £9.95
Add to basket
We use cookies on our website to give you the most relevant experience by remembering your preferences and repeat visits. By clicking “Accept”, you consent to the use of ALL the cookies.
Cookie settingsACCEPT
Manage consent