Battle of Pelennor Fields: The Lord of the Rings

Enter the world of Middle-earth and play the greatest battles from both the The Lord of the Rings and The Hobbit in this starter set! Containing miniatures and all the rules needed to defend the city of Minas Tirith.

Battle of Pelennor Fields: The Lord of the Rings is a starter set containing 84 miniatures. Prepare to enter the world of Middle-Earth and recreate battle scenes as King Théoden and the Riders of Rohan make their arrival. Defend the city of Minas Tirith and take control over the forces of Evil and cause war upon the kingdom of Gondor!

This box includes the complete Middle-earth Strategy Battle Game Rules Manual, information regarding Open, Narrative and Matched Play and Middle-earth miniatures. Find everything from the basic rules of movement through to handling siege engines and even casting magical powers. There is also  beautifully painted armies to help provide inspiration for your own collections!

Find all the components for Battle of Pelennor Fields below:

Be the first to review “Battle of Pelennor Fields: The Lord of the Rings” Cancel reply 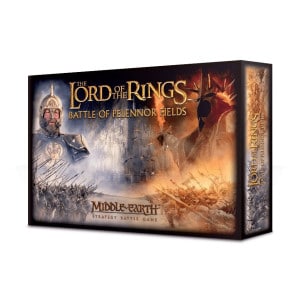 You're viewing: Battle of Pelennor Fields: The Lord of the Rings £74.95
Add to basket
We use cookies on our website to give you the most relevant experience by remembering your preferences and repeat visits. By clicking “Accept”, you consent to the use of ALL the cookies.
Cookie settingsACCEPT
Manage consent