The Dark Crystal Board Game

Will Jen and Kira find the Shard and manage to heal the Dark Crystal? Find out in this board game based on the movie The Dark Crystal by Jim Henson!

The Dark Crystal: Jim Henson is a fantasy board game for 2-4 players aged 14 years or over. Players must race against each other as well as time to reach the shard and restore the crystal!

The fantasy film directed by Jim Henson follows Jen Gelfling on her quest to overthrow the ruling skeksis, the rulers of the empire, by restoring the broken crystal. Set on an alien planet, the game captures the dark fantasy as portrayed in the film.

This board game includes 4 figurines of main characters Jen, Kira, SkekUng and SkekSil. Included is a game board which features artwork representing legendary places seen throughout the movie including the Valley of the Stones, the Crystal Castle and Aughra’s Observatory. This game is an essential collectors item for any fans of the movie!

This team game is based on the movie, The Dark Crystal. Not only do players race against each other, they are also in a race against time to restore the crystal.

Play time is estimated to last between 60-120 minutes per game. 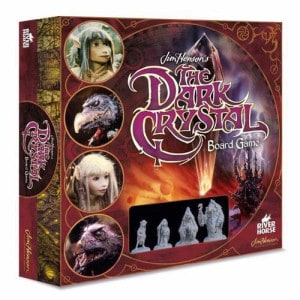 You're viewing: The Dark Crystal Board Game £30.07
Add to basket
We use cookies on our website to give you the most relevant experience by remembering your preferences and repeat visits. By clicking “Accept”, you consent to the use of ALL the cookies.
Cookie settingsACCEPT
Manage consent