Recruit heroes and assemble your team to face off about Thanos in Thanos Rising: Avengers Infinity War. Can you collect the infinity stones before it’s too late?

Thanos Rising: Avengers Infinity War is a cooperative card game where 2-4 players aged 10 years or over will assemble their heroes and attempt to defeat Thanos.

Players must build their characters strength and collect all six infinity stones to stop Thanos and his evil forces from completing his master plan. Winning this game will require critical thinking and good communication skills to stop Thanos in his tracks!

In Thanos Rising: Avengers Infinity War, players will recruit heroes and assemble teams that will go up against Thanos and his forces. Each player will get the choice of Captain America, Black Panther, Gamora or Doctor Strange.

Teams represents the elements such as Technology, Battle, Cosic and Mystic that will used in attempt to defeat Thanos. Throughout the game players will collect counters until a stone has all its spaces filled and can be taken.

Stones have a different abilities, but all of them spells doom for the Avengers. When Thanos starts to obtain the stones players will need to make the most out of each and every turn to start to swing the game back into your favour.

If Thanos manages to obtain all the stones he will win the game, but if the Avengers can take down his minions they will save the day. Do you have what it takes to stop Thanos?

Find the full list of game components for Thanos Rising below: 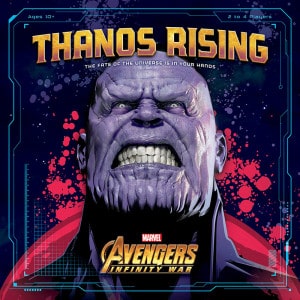 You're viewing: Thanos Rising: Avengers Infinity War £31.71
Add to basket
We use cookies on our website to give you the most relevant experience by remembering your preferences and repeat visits. By clicking “Accept”, you consent to the use of ALL the cookies.
Cookie settingsACCEPT
Manage consent