Terraforming Mars Prelude includes a set of Prelude cards to add to your original base game and boost your process. You are now able to decide the future of Mars by making earlier choices using new project cards!

Terraforming Mars Prelude is an expansion pack for the original game which provides for 1-5 players aged 12 years and over. Terraforming Mars requires players to use project cards to build cities, establish greenhouse gases and introduce animals to make the planet habitable for the human race. However, this process comes with three difficulties as the temperature is too cold, there’s a lack of oxygen and a lack of oceans. To win the game these three factors will need solving, the player with the most points will become the winner.

Terraforming Mars Prelude expansion can be used alongside any expansions as well as the original game. This expansion focuses on the early stages of the game and includes backgrounds of companies. Cards have effects that will boost players progress based on the corporation they choose, opening up a new range of possibilities. Included in this pack is 5 corporation cards and 7 project cards so the adventure can continue!

Below is an overview of how to play Terraforming Mars:

The full game components for Terraforming Mars Prelude will be listed below: 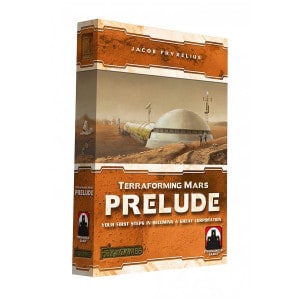 You're viewing: Terraforming Mars: Prelude Expansion £13.25
Add to basket
We use cookies on our website to give you the most relevant experience by remembering your preferences and repeat visits. By clicking “Accept”, you consent to the use of ALL the cookies.
Cookie settingsACCEPT
Manage consent