It’s the 2400s and it is your job to make Mars habitable for the human race. Players must meet the three goals involving temperature, oxygen levels and oceans to make the planet resemble earth and win the game!

Terraforming Mars is a game for 1-5 players aged 12 years and over. Throughout the game players will use project cards which can be used to build cities, establish greenhouse gases, introduce animals and so much more. Terraforming Mars comes with great difficulties including the temperature being too cold, lack of oxygen and lack of oceans. To be in for the chance of winning the game these three factors will need to resemble earth, the player with the most points will win with a hefty bank balance.

Players income will be based on their terraform ratings which all start at 20. Ratings will increase when one of the three global parameters increases. Aiding you throughout the game are over 200 different project cards all contributing towards making the planet habitable. However, they often have requirements which must be met before they can be used. For example, higher oxygen levels and an increase in temperature will need to be met. Each round of the game includes three phases as known as the research phase, action phase and production phase all with different rules which can be found below.

We have provided an overview on how to play Terraforming Mars below:

The full game components will be in a list below:

Be the first to review “Terraforming Mars” Cancel reply 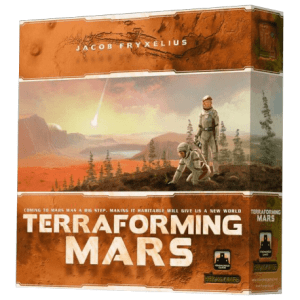 You're viewing: Terraforming Mars £44.80
Add to basket
We use cookies on our website to give you the most relevant experience by remembering your preferences and repeat visits. By clicking “Accept”, you consent to the use of ALL the cookies.
Cookie settingsACCEPT
Manage consent