Gain fortune and approval from gods as you construct the Pyramid of the Sun in Teotihuacan City of Gods. Travel back in time to the city and use your wealth and knowledge to earn fame!

Teotihuacan City of Gods is a game for 1-4 players aged 14 years and over who have now been invited to the greatest city of Mesoamerica. The rival families are competing for fortune and approval from the gods as they build the Pyramid of the Sun. If you are familiar with Tzolk’in: The Mayan Calendar, both sharing the same designer, then this could be a game for you to enjoy.

In Teotihuacan City of Gods, you will manage your workforce, gain resources, build houses, raise the Pyramid of the Sun and so much more. Cocoa is an important resource throughout this game as it will be needed to feed your workers after an eclipse. So, be strategic and create a plan as the player with the most points wins!

Below you will find a simplified version on how to play Teotihuacan:

Below if a full list of game components for Teotihuacan City of Gods:

How to Play Teotihuacan

Be the first to review “Teotihuacan City of Gods” Cancel reply 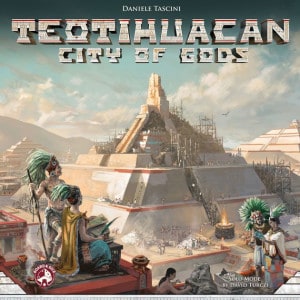 You're viewing: Teotihuacan City of Gods £33.40
Add to basket
We use cookies on our website to give you the most relevant experience by remembering your preferences and repeat visits. By clicking “Accept”, you consent to the use of ALL the cookies.
Cookie settingsACCEPT
Manage consent