Tapestry board game is a civilisation game for 1-5 players lasting roughly 2 hours. The game features stunning designs and art-work designed by James Stegmaier for all to enjoy!

Tapestry is a game where 1-5 players aged 12 years or over create civilisations using different advancement tracks such as exploration, military, technology and science. Build your own unique city and earn victory points over five rounds.

The science track helps players move up other tracks at a faster pace. This gives them stronger abilities and faster speed so they build landmarks before quicker. Military track offers benefits and the ability to conquer discovered land. Players can also gain another civilisation mat when reaching the last space. Technology gives players new cards as well as helping upgrade others. This track also offers cheap benefits as costs start to increase. Exploration allows players to draw new tiles and gain benefits. Players can also place farms into their capital city.

The game starts by players choosing their civilisations and city map which will need populating with both building and landmarks. Each round of the game is played using income and advance turns so players can begin gaining resources.

Here you will find a simplified version of how to play Tapestry:

Be the first to review “Tapestry” Cancel reply 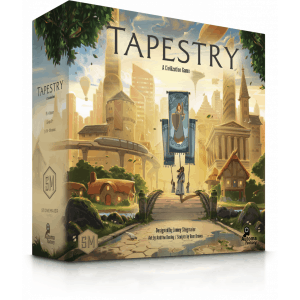 You're viewing: Tapestry £57.45
Add to basket
We use cookies on our website to give you the most relevant experience by remembering your preferences and repeat visits. By clicking “Accept”, you consent to the use of ALL the cookies.
Cookie settingsACCEPT
Manage consent