Take on the role of a child’s stuffed toys and save her from the evil monsters that lurk under her bed. Stuffed Fables is an adventure game that includes multiple challenges and surprises throughout!

Stuffed Fables is an adventure game where 2-4 players aged 7 years and above will become stuffed toys attempting to fight the monsters that lurk under the bed.

The unusual adventure game consists of players taking on roles of brave stuffies trying to save the child from the evil mastermind. Fight using melee attacks and leap across conveyor belts to save the child’s life and destroy the evil.

Stuffed Fables delivers a thrilling narrative which is driven by player choices as well as many surprises and challenges. Players will explore and come across many curious discoveries to create a memorable tale for all families.

Stuffed Fables plays in turns and players will draw five dice from the dice bag to begin.. The dice drawn will determine which actions and options will become available to the player. For example, red dice will perform melee attacks and green dice will perform ranged attacks. Most of the dice will find a strategic use such as, moving, using items, or making contributions to tasks.

Players have the option to store dice for later use and can combine them for stronger actions, or use them for multiple activations. Throughout the game black dice will also be drawn and bring alone minions to attack.

Encourage your fellow players by sharing dice and stuffing. As well as being able to fight minions, every page of the included storybook offers points of interest, characters to trade with and unusual challenges.

Find the full list of game components for Stuffed Fables below:

Be the first to review “Stuffed Fables” Cancel reply 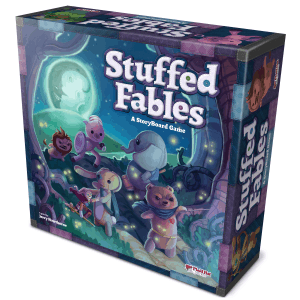 You're viewing: Stuffed Fables £51.65
Add to basket
We use cookies on our website to give you the most relevant experience by remembering your preferences and repeat visits. By clicking “Accept”, you consent to the use of ALL the cookies.
Cookie settingsACCEPT
Manage consent