This kit can build the Storm Speeder Hammerstrike, Hailstrike or Storm Speeder Thunderstrike variants. It is supplied with a Citadel 90mm Round Base and a Flying Stem. The gun platform can be built to move – intimidate your opponents by having your heaviest weaponry pointing right at their units!

The Hailstrike is so heavily armed that it can annihilate entire swathes of infantry in fusillades of blistering projectiles. Speeding over the battlefield, its specialised loadout shatters charging formations and shreds barricades and defences. A Storm Speeder Hailstrike adds fast-moving anti-infantry punch to your Space Marines collection. Choose this version of the Storm Speeder if you’re going up against armies such as Orks or Genestealer Cults, or any force featuring lots of lightly armoured units. This kit includes 94 components that can be used to build a Storm Speeder Hailstrike armed with two fragstorm grenade launchers, an onslaught gatling cannon and a twin ironhail heavy stubber.

The Hammerstrike excels at rooting out enemies from trench and bunker networks. Sweeping low over the battlefield, it employs searing melta blasts and volleys of rockets to crack the foe’s defence lines wide open. A Storm Speeder Hammerstrike bears weapons designed to bore through thick armour and destroy bunkers. Take this Storm Speeder variant if you’re likely to be facing a dug-in foe with lots of fortifications to deal with. This kit includes 94 components that can be used to build a Storm Speeder Hammerstrike armed with a hammerstrike missile launcher, two krakstorm grenade launchers and a melta destroyer.

Thunderstrikes outmanoeuvre the foe at every turn, targeting vulnerable points in armour, fuel tanks and missile hoppers to turn engines of war into raging fireballs. Just a single Thunderstrike is capable of destroying armoured breakthrough attempts, and when one is on the battlefield, few enemies are safe. A Storm Speeder Thunderstrike is a speedy tank hunter. Add this to your force if your opponent likes to use lots of heavily armoured vehicles – your missiles and las-talon will be tearing through them in no time! This kit includes 94 components that can be used to build a Storm Speeder Thunderstrike armed with stormfury missiles, a thunderstrike las-talon and a twin icarus rocket pod. 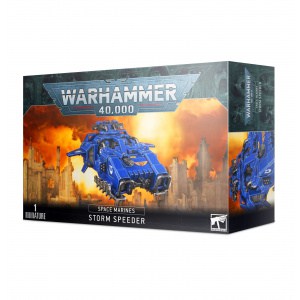 You're viewing: Storm Speeder (Space Marines) £33.34
Add to basket
We use cookies on our website to give you the most relevant experience by remembering your preferences and repeat visits. By clicking “Accept”, you consent to the use of ALL the cookies.
Cookie settingsACCEPT
Manage consent