Elite, genetically engineered warriors tasked with the protection and expansion of the Imperium of Man, the Space Marines are the ultimate weapon. Armed with a vast selection of iconic weaponry, clad in suits of intimidating ceramite power armour and borne to war aboard deadly vehicles, they are the greatest warriors the galaxy has ever known.

The citizens of the vast Imperium can sleep a little easier at night knowing that they are defended by the relentless Space Marines, the genetically engineered soldiers of the Emperor. These troops are the elite among the stars, charging into battle in their mighty suits of power armour and bringing with them the most devastating of arsenals. And if their marines cannot bring it down, their thunderous heavy support and lethal vehicles will. Whatever the threat, the Space Marines will fight and, by the Emperor, they shall know no fear!
This set is excellent value, instantly giving you access to a ten-man Tactical Squad, a Venerable Dreadnaught and a Captain in Terminator Armour to defend the Imperium. Assemble and paint these awesome miniatures to use them in games of Warhammer 40K! 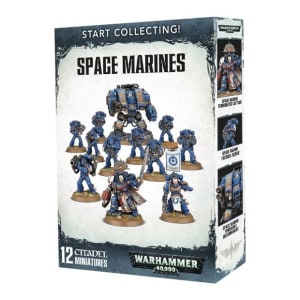