If you seek to honour the Allfather by mustering an army of the mighty of Sons of Russ, the Start Collecting! Primaris Space Wolves is the way to do it!

All Space Marines in this particular chapter have one thing in common: they were raised on Fenris, a world of scant resources, abundant monsters and vicious humans that threaten to end their lives before they can don their first suits of power armour. To become a Space Wolf is already a mighty achievement, but their triumphs do not end there. The Space Wolves may be savage and even barbaric at times, but what defines them is how they remain in control of their predatory instincts even in the heat of battle to protect the citizens of the Imperium. Those who they face will quickly find themselves cut down by fang, claw, blade and boltgun! 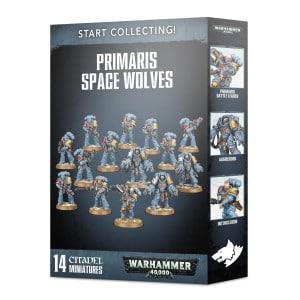