Though they once ruled the stars, the Aeldari brought about a terrible curse that shattered their empire forever. Crossing the galaxy on their vast world-ships, lead by the most powerful psykers in the universe, they rage hard against the dying of the light. Under the leadership of Farseers, psychics capable of planning thousands of years into the future with patience and confidence unmatched by any race, the Aeldari wish to see their empire burn brightly once more, illuminated by the glory of total war, before fate consigns them to dark oblivion.

Though the empire of the Aeldari has long since fallen into ruin, the remnants of these ancient and powerful rulers among the stars are still a force to be reckoned with. With superior technology, relentless psykers and interstellar world-ships, the Craftworld armies will not cease their immortal war on the universe until their empire is restored!
This set is excellent value, instantly giving you access to five Wraithguard (who can instead be assembled as Wraithblades), a Wraithlord, a War Walker and a Farseer to lead them into battle. It also includes one Aeldari transfer sheet to help take your hobby to the next level. Assemble and paint these awesome miniatures to use them in games of Warhammer 40K!

Be the first to review “Start Collecting! Craftworlds” Cancel reply 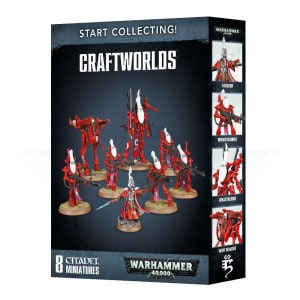 You're viewing: Start Collecting! Craftworlds £43.67
Add to basket
We use cookies on our website to give you the most relevant experience by remembering your preferences and repeat visits. By clicking “Accept”, you consent to the use of ALL the cookies.
Cookie settingsACCEPT
Manage consent