Made up of innumerable billions of soldiers from a million different worlds, the Astra Militarum is, by sheer weight of numbers, the greatest army the galaxy has ever known. For ten thousand years they have used their overwhelming numbers to crush the enemies of the Imperium and defend against the encroaching horrors of a cold universe that knows only war. They hold nothing less than the survival of humanity in their hands.

The Astra Militarum, loyal troops dedicated to the service of the Emperor and the protection of his citizens, are a mighty force in the grim, war-torn future of Warhammer 40K. If the endless numbers of troops they field are not enough to wrestle victory from the claws of their foes, their fearsome artillery and devastating heavy support will; for the Emperor, of course! The Start Collecting! Astra Militarum set will give you a great balance of all three to get your new army going, or help swell the numbers of your existing force.
This set is excellent value, instantly giving you access to ten Cadian Shock Troops, a Cadian Heavy Weapon Team, a Lemon Russ Battle Tank and an Officio Prefectus Commissar to keep them all in line. Assemble and paint these awesome miniatures to use them in games of Warhammer 40K! 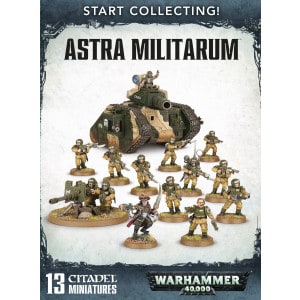 You're viewing: Start Collecting! Astra Militarum £43.67
Add to basket
We use cookies on our website to give you the most relevant experience by remembering your preferences and repeat visits. By clicking “Accept”, you consent to the use of ALL the cookies.
Cookie settingsACCEPT
Manage consent