Enter the next era of interstellar combat in the Star Wars galaxy! In X-Wing Second Edition, you assemble a squadron of iconic starfighters from across the Star Wars saga and engage in fast-paced, high-stakes space combat with iconic pilots such as Luke Skywalker and Darth Vader.

With refined gameplay that focuses on the physical act of flying starships, X-Wing Second Edition lets you create your own Star Wars space battles right on your tabletop. Intuitive mechanics create the tense atmosphere of a firefight while beautifully pre-painted miniatures draw you deeper into the action. Man your ships and enter the fray!

Any squadron is composed of pilots of varying skills, from rookies encountering their first action to hardened veterans used to the din of battle. Because of this, each pilot will react to their surroundings differently. On every ship card, you’ll find an initiative value that represents that pilot’s reflexes, skill, and even luck. This initiative value determines when your ships will act. During the round, the lowest skilled pilots are forced to move first, as they attempt to get into position to open fire.

Every maneuver that you make affects your pilots and determines how they can be used later on. Pull off a daring red maneuver and you might get the drop on an enemy ship, but you’ll also have to take a stress token, limiting your options in future rounds. Execute an easy blue maneuver, however, and you can remove a stress token.

Carefully plotting your movements is critical to success in X-Wing Second Edition. If you can anticipate your opponent’s movements, you may catch them off guard and set up the perfect shot, while keeping your own ships out of harm’s way. 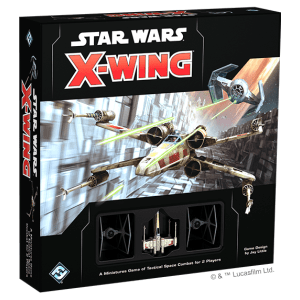 You're viewing: Star Wars X-Wing Core Set (Second Edition) £27.15
Add to basket
We use cookies on our website to give you the most relevant experience by remembering your preferences and repeat visits. By clicking “Accept”, you consent to the use of ALL the cookies.
Cookie settingsACCEPT
Manage consent