Rebel and Imperial fleets fight for the fate of the galaxy in Star Wars™: Armada, the two-player miniatures game of epic Star Wars space battles!

Massive Star Destroyers fly to battle against Rebel corvettes and frigates. Banks of turbolasers unleash torrential volleys of fire against squadrons of X-wings and TIEs. Engineering teams race to route additional power to failing shields. Laser blasts and explosions flare across the battlefield. Even a single ship can change the tide of battle.

In Star Wars: Armada, you assume the role of fleet admiral, serving with either the Imperial Navy or Rebel Alliance. It’s your job to issue the tactical commands that will decide the course of battle and, perhaps, the fate of the galaxy.

However, battles between capital ships are fought on a massive scale all their own; the more powerful your ships, the harder it is to adjust their actions on the fly. Capital ships can’t easily vary their speeds or execute hairpin turns like the starfighters that buzz around them, so successful admirals must learn to master every aspect of the ships in their fleet and learn how best to implement their strategies well in advance of the initial engagement.

At the game’s heart are its capital ships—massive war machines that can exceed a kilometer in length and whose crew can number in the thousands. These ships are sophisticated and complex. Their defenses, armaments, and engines all run from separate systems. You and your opponent must balance all these systems throughout your battles. Accordingly, emerging victorious will require more than just raw firepower. It requires a keen tactical mind.

Each pre-painted capital ship is divided into four sections: front, rear, left, and right. While a ship has a single hull value, which indicates how many hits it can take before it’s destroyed, it has separate shield values for each of its sections, and each of these sections also comes with its own firing arc and attack value, indicated by a number of dice. 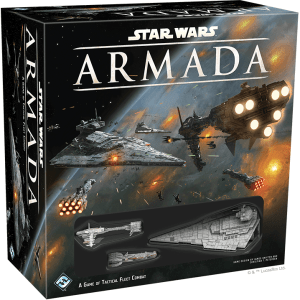 You're viewing: Star Wars: Armada Core Set £80.21
Add to basket
We use cookies on our website to give you the most relevant experience by remembering your preferences and repeat visits. By clicking “Accept”, you consent to the use of ALL the cookies.
Cookie settingsACCEPT
Manage consent