An awesome sight, descending at incredible velocities from orbiting warships to engage and annihilate enemy craft, Stormhawk Interceptors are a stunning hymn to aerial superiority that the Space Marines sing with gusto. The frontal armour and huge firepower makes them excellent dogfighters, hurtling through the clouds to execute target after target in a blazing display of incendiary defiance.

Often seen in Vehemence Attack Patterns, Stormhawk squadrons and their golden haloes of flares discharged to gently dissuade incoming fire are a signal that whatever planet the skies are over, they belong to the Emperor.

This multi-part plastic kit contains all the components necessary to assemble one Stormhawk Interceptor, ruler of the skies and destroyer of the Imperium’s flying enemies. Armed with a twin-linked assault cannon, a las-talon (which can be replaced with an icarus stormcannon,) twin-linked heavy bolters (which can be replaced with either a skyhammer missile launcher or typhoon missile launcher) and an infernum halo-launcher. Supplied with a transfer sheet, one Citadel 120mmx92mm Oval base and a flying stem.

This kit can also be used to assemble the Stormtalon Gunship. 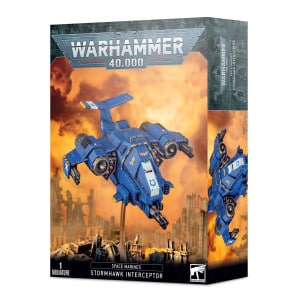 You're viewing: Space Marines Stormhawk Interceptor £27.79
Add to basket
We use cookies on our website to give you the most relevant experience by remembering your preferences and repeat visits. By clicking “Accept”, you consent to the use of ALL the cookies.
Cookie settingsACCEPT
Manage consent