The Space Marines Combat Patrol includes a variety of fearsome warriors that stand over 7 feet tall with a skeleton tougher than steel. Although there is few in number, they are bio-mechanically enhanced superhumans in armour that can protect them from even the deadliest weapons.

Primaris Lieutenant serve under the command of Captains and help to direct battle-brothers in engagements. They are often assigned different roles within chapters, for example in the Salamanders they are given the duty of being a bodyguard to their captain.

Primaris Infiltrators are considered to be battleline squads responsible for disrupting the enemy and sabotaging their targets of opportunity. They use smoke grenades against their opponent and target them with their Bolt Carbines as they appear through the fog. Infiltrators are well trained in survival skills due to time they have spent behind the enemy line.

Suppressors are Primaris Space Marines that specialise in responses to enemy threats. They will enter battle with speed using either Grav-Chutes or Jump Packs, once the target has been sighted they will engage shock-absorbing Servo Plates and Accelerator Autocannons. Anyone within their path will risk being blown apart and will need to take shelter from the firestorm.

Eliminators are dedicated marksmen that seek out targets and haunt the battlefield. Their weapons include the Las Fusil and Instigator Bolt Carbine both designed to bring down the opponent from a range.

Primaris Impulsor is a fast-moving anti-grav mode of transport favoured by the Vanguard Space Marines. The impulsor is lightly-armoured and capable of transporting 10 Space Marines into battle by swiftly passing obstacles such as trench lines and toxic industrial runoff.

Begin collecting your Space Marine army with this money saving set and dive right into battles of Warhammer 40k! 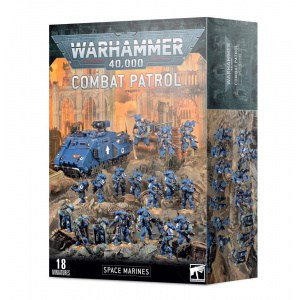 You're viewing: Space Marines Combat Patrol £70.11
Add to basket
We use cookies on our website to give you the most relevant experience by remembering your preferences and repeat visits. By clicking “Accept”, you consent to the use of ALL the cookies.
Cookie settingsACCEPT
Manage consent