This multi-part plastic kit contains all the components to build the Ironclad Dreadnought. Including multiple weapon options, scenic base, plastic components and more!

This kit contains the components to assemble the Ironclad Dreadnought, a  massive fighting machine that weighs several tons and stands two or three times the average height of a man. As the Dreadnought strides its way into battle, incoming fire spatters against the miniature like rain off the towering adamantium and ceramite hull. Fiery death roars comes from his weapons and the great metal arms churn through all who are foolish enough to attempt to stand before him.

Be the first to review “Ironclad Dreadnought” Cancel reply 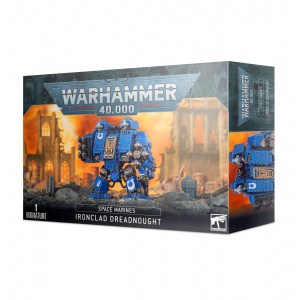 You're viewing: Ironclad Dreadnought £27.94
Add to basket
We use cookies on our website to give you the most relevant experience by remembering your preferences and repeat visits. By clicking “Accept”, you consent to the use of ALL the cookies.
Cookie settingsACCEPT
Manage consent